A Traverse of the Brenta Dolomites

I seem to have the same love-hate relationship with via ferratas as I do with caving. As I'm clinging to a frayed metal cable half way up a cliff, legs shaking on a rusty stemple, it's not unusual for me to swear that this will be my last via ferrata and that when I get to the top, I will pack it all in and take up a hobby that involves sitting down. Yet later, when I've stopped hyperventilating, the vomitous terror of a kilometre of space beneath my feet seems to slip from my mind. I think to myself, "it can't really have been all that bad, can it?"

That's why Stuart was able to persuade me, along with Kathryn and Adrian, to join him on a 4-day hut-to-hut via ferrata trip in the Brenta Dolomites.


After several trips that probably weren't worthy of being blogged about, I had a feeling this one might be different. Tom and Emma had dreamed up a particularly perverted itinerary for Tom's romantic birthday caving trip: a combination of the Grind Circle, with a long Ease Gill Caverns through trip. The classic 'Greater Ease Gill Traverse' goes from Top Sink to Pippikin Pot. It's possible to do a longer trip by exiting out of Bye George Pot instead, one particularly notable obstacle being a squeeze known as The Backbreaker. Today's plan was Top Sink - Bye George, via the Grind. What better way to spend Valentine's Day?

I don't know what the collective noun for a group of cavers is, but let's say that a gaggle of potholers (9 in total) approached Top Sink at 11am, stripped off oversuits in unison and added to to the water levels in the cave. The first part of the trip went well. Easy and familiar caving, and enough people acquainted with the route, meant that, despite the group size, the landmarks came thick and fast: Holbeck Junction, Stop Pot, the high level series. It would have been perfect were it not for the constant anxiety gnawing at the back of my mind of the difficulties yet to come. We were a sweaty, sticky mess as we abseiled down the 88ft pitch to the start of the day's real objectives.

The Gouffre Berger and Other Summer Adventures

I spent a week on the joint Red Rose and CSCA (army caving club) expedition  back in August. Only being there for the first week of the expedition, I was always unlikely to have a chance of getting to the bottom, although frustratingly as it turned out, a couple of days longer would have been sufficient.

Nonetheless, some fine caving was done. The first trip (12th August, 6 hrs), with Adrian, went as far as the top of Aldo's pitch, helping to ferry the small mountain of rope and camping gear that needed to make its way down the cave. Aldo's Pitch is basically the final (42m) pitch before 'the big stuff' starts at -250m. As far as this, the cave consists of several dry pitch series separated by huge winding rifts a metre of so wide which are negotiated far above the floor with traverse lines in place. Fun and pleasant caving.


On my only previous visit to Magnetometer Pot we'd managed to miss all the good bits by sliding down a tiny slot quite close to the entrance and spending a couple of fruitless hours exploring some small and scrotty passages, so I was glad of a chance to go back and have a proper look around today. It was also my first caving trip for over a month and my first blog for even longer. Mea culpa on both accounts!

Nine of us converged on Fountains Fell. Adorned with varying quantities of neoprene, we made our way down the laddered entrance pitch and a couple of hand-lined climbs. A long crawl in elbow deep water was the next obstacle. This was quite pleasant in a wetsuit as the water could take some of the weight of my torso (which is not a lot of weight admittedly, but these days is more than my arms can manage). A long dry crawl followed, and my arms were already feeling tired due, in part, to the resistance of my wetsuit. And also my puniness.

We now entered the River Styx - a fine stooping-height stream passage with an elliptical cross section and decorated ceiling. Eventually we reached the ladder down into Caton Hall, where Steph and Phil turned round.

Below Caton Hall, the character of the cave changed considerably. The 'Rough Crawl' was crawling or flat-out, but with a sharp floor full of milled potholes (some of them over a metre deep) and flowing water. Neoprene was a boon here, not just for warmth but for padding too - oversuits took a battering. The interesting if arduous passage eventually led to a duck, with a flat-out bypass.

I decided to challenge myself and try the duck. I'm usually rubbish at them - by which I mean they are too scary. But today I had specifically packed my secret weapon - a neoprene hood. The water was chest deep, but the ceiling pinched in overhead leaving only a small triangle of airspace, a few inches at most. Attempt number 1 resulted in unpleasant coughing and spluttering as my head bounded off the ceiling and I ended up underwater. I rapidly realised that the advice to tackle ducks on your back does not mean 'reverse into them with your head above the water'. For attempt 2, I floated on my back and ever so slowly edged my way through, pressing my nose and mouth into the small triangle of airspace. Success! This felt like a major achievement in my caving career and, frankly I was expecting great plaudits and perhaps some sort of ticker tape parade. I got 'indifference' instead - humph! Nevertheless, I'm very pleased with myself!

A few minutes of crawling and stooping later, we emerged in a large passage containing 'The Whale', a huge broken flake on the floor. Emma, Tom and Becka headed deeper into the cave in search of further misery (I wonder where they are as I type this a few hours later...) but Jess, Ian, Julia and I turned round and dragged our tired bodies back to the entrance. Great trip!

"Did I Mention I've got lurgy?"


I'm lying on the sofa feeling quite broken typing this on Sunday evening. I guess that's what happens if you go caving in Daren Cilau when you aren't very well (actually I think that's what happens when you go caving in Daren even when you are well). The thing is, trips to Borrowed Boots Streamway and the Psychotronic Strangeways don't seem to happen that often and we'd been planning this one for months, so I thought I'd soldier on. Plus it was my birthday the day before. Anyway, that's enough whingeing for now. I'm sure I'll mention my man-flu again later, but stop me if I keep going on about it.

Another trip down Titan

It's good to do Titan now and then to remind myself of how scary big pitches are. This time I had also claimed that I might be able to find my way through to Peak Cavern. The others on the trip (Kathryn, Matt and Sophie) didn't know the route so the potential was there for a bit of a stressful day!

The first challenge was finding Titan. Thick fog at the top of Cave Dale had reduced visibility somewhat, and finding a small manhole cover in one of the nondescript fields was going to be tricky. Luckily, a team was heading in ahead of us to go digging (they were also doing the rigging and derigging, which was useful) and I spotted them on the surface just as they were about to drop down the entrance shaft - great timing!

Unlike my last trip here, I was the first from our group down, which meant no waiting around at the top of Titan. This reduced the buttock-clenching terror I usually associate with big pitches to merely hair-raising discomfort. Titan swiftly dispatched, I settled myself at the bottom to wait for the others, and watched as pin pricks of light became visible on the Event Horizon and torch beams swivelled around the shaft as Sophie, then Matt, then Kathryn slid down the rope to join me.
Read more »
Posted by Edvin at 09:37 1 comment:

Sidetrack Cave has an unusual access procedure which involves abseiling down the side of a quarry to get to the entrance. Kathryn and I decided that this was enough of a novelty to warrant a trip in itself.


After half an hour of wandering along some dodgy ledges in completely the wrong part of the quarry, we eventually found the right spot for the abseil. Watching the rope sawing across sharp edges of quarried limestone was a little perturbing but we made it down safely.

The cave itself starts off with 100m of flat out crawling, with a few puddles thrown in for amusement (well I was amused anyway...). The passage was probably once 2-3m in diameter, but it is now full of mud to within a few inches of the ceiling, so there's no choice but to squirm through on your belly. Eventually we reached a T-junction with a walking-sized passage. We explored in both directions and looked at some quite nice formations, although I think they are starting to get a bit muddied and damaged in places.

After a few photos we headed back out and prussiced very gingerly back out of the quarry. 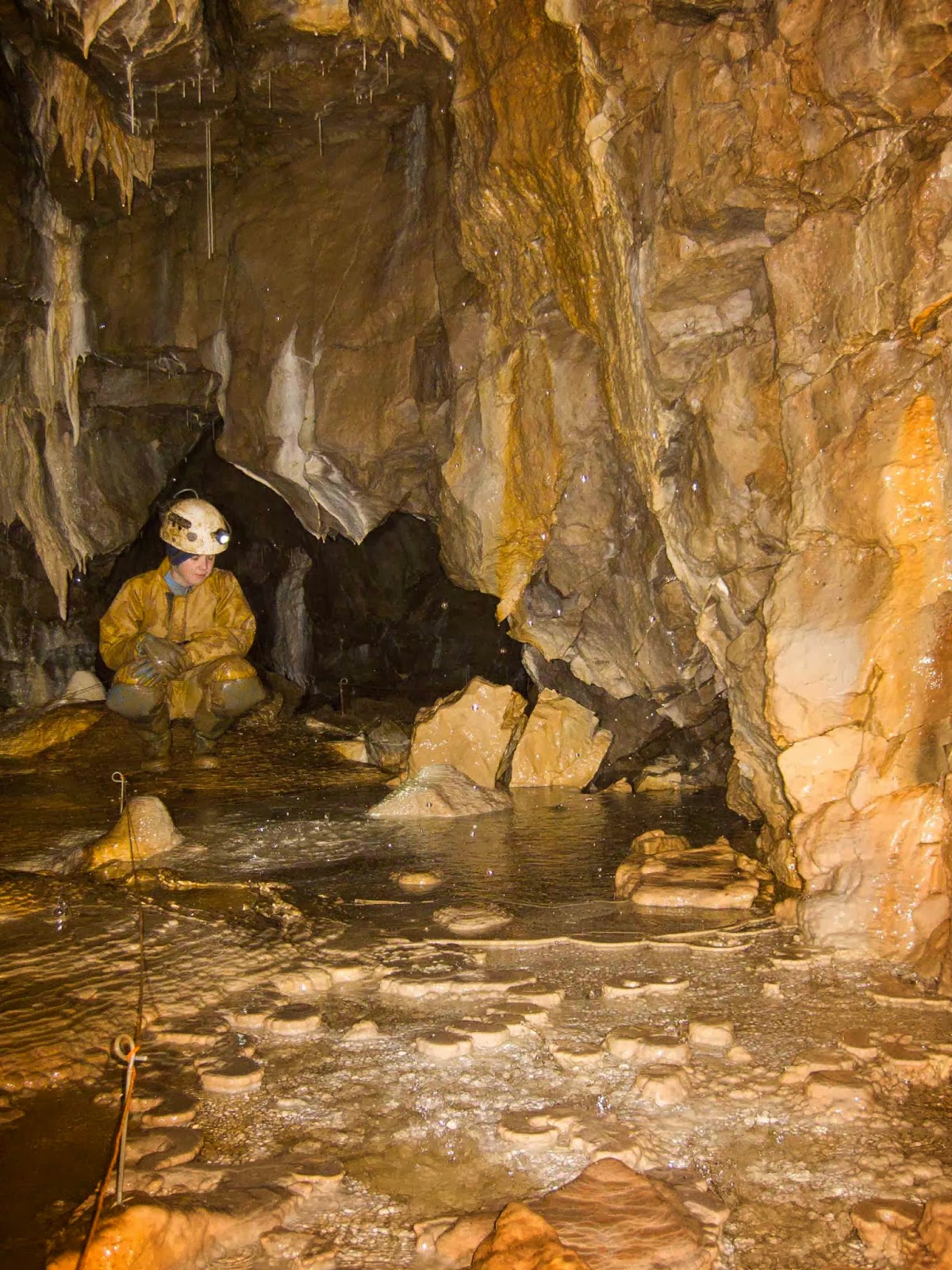 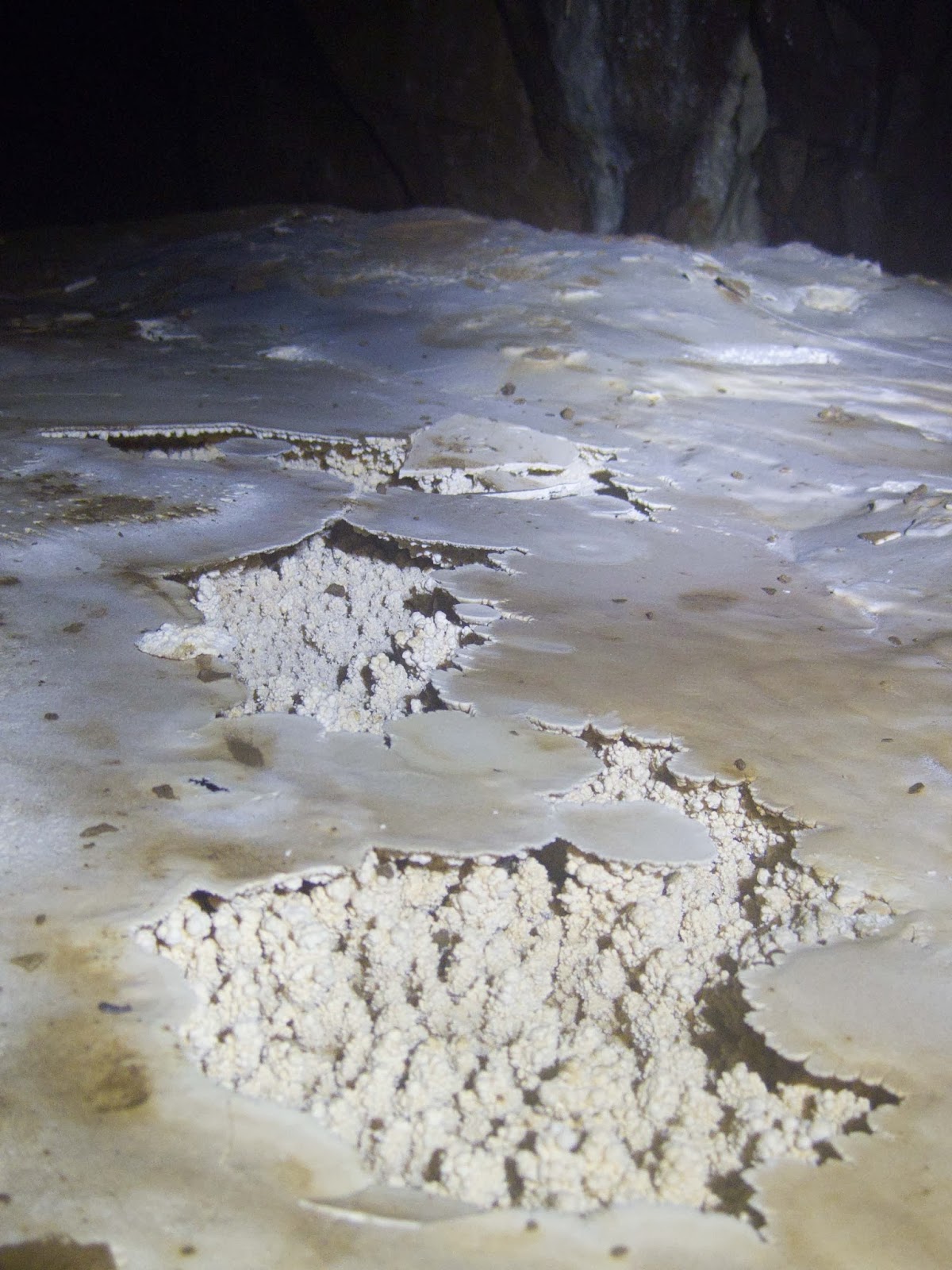 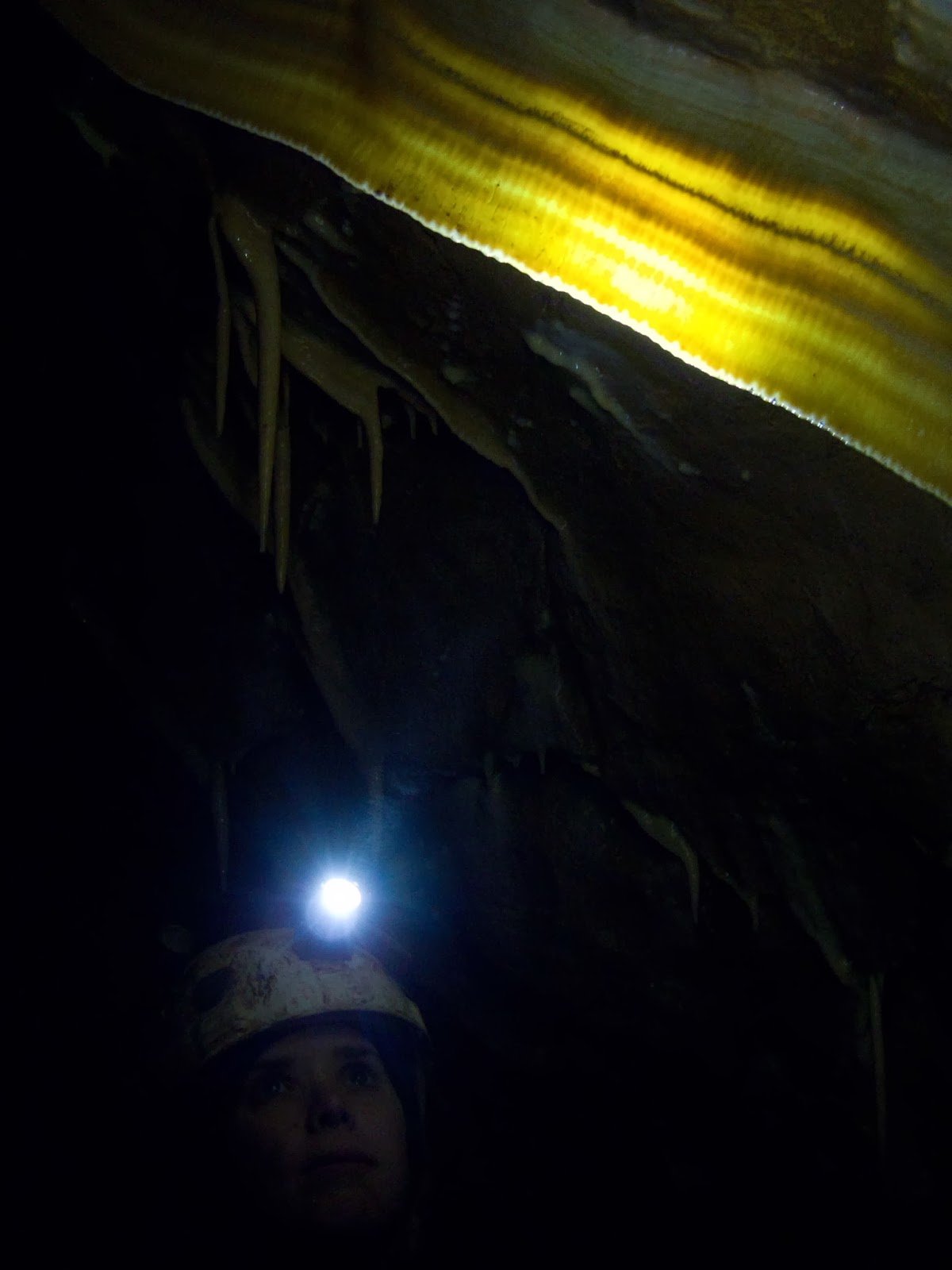 I started caving in 2006. Soon afterwards I decided to start keeping a log of my underground trips, which eventually became this blog. I don't write up every trip underground, and I also seem to have started writing about non-caving adventures from time to time.

Other links of interest:

Here are some other links that might be of interest: 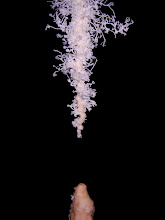